How It’s Made: Abode

August 18, 2022
Our second Trust-a-thon minigame is about the small steps you can take to live more sustainably at home.

Vesalius Trust-a-thon is an annual team fundraiser that supports student and professional research in the field of biomedical communications. Teams have two weeks to create a communication piece based off of a secret theme. After last year’s successful Pandemiquest game jam, Team AXS was once again up for the challenge! Our protagonist Rudy returned as a sustainable eco-warrior for this year’s secret theme: A Path Forward.

Before hitting the drawing board, first we rebranded our team with a snazzy new team name: KICK AXS! With that squared away, we pulled together a team of designers, artists, managers, and devs to begin plotting our next winning idea. 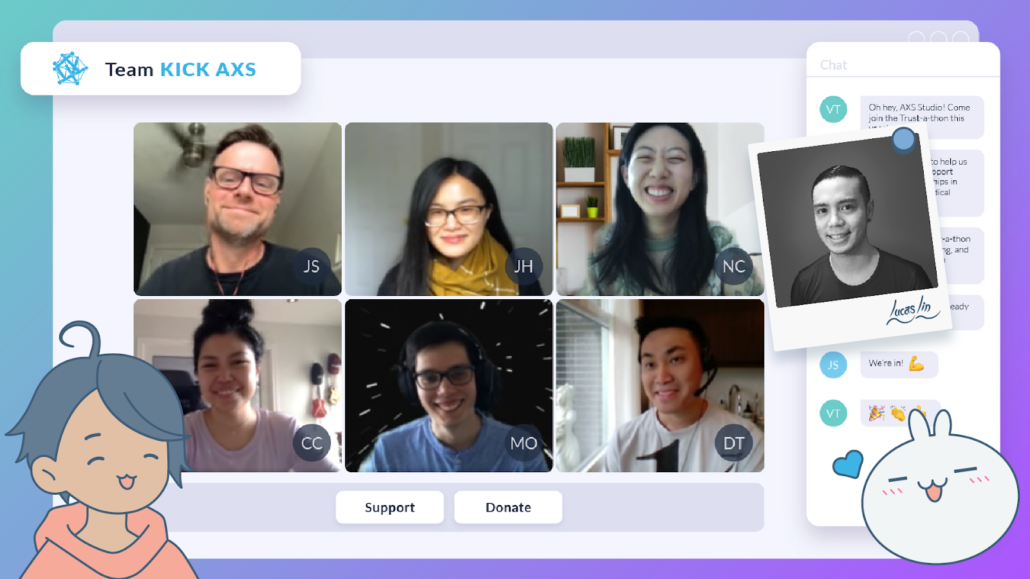 Our KICK AXS team!
Since last year’s Trust-a-Thon, we’ve switched collaborative whiteboard programs from InVision Freehand to Miro, which we found to have a much smoother user experience for ideation. This time, each team member came up with ideas individually, before getting together to determine which topics and game mechanics sounded most interesting. The ideas ranged from an endless runner game where you play as a nanobot traveling the bloodstream, to seeing how food travels through the digestive system 💩.
Each idea was evaluated for feasibility and fun– we had a longer timeline than last year (2 weeks vs. one), but scope still had to be kept in check! The theme “A Path Forward” really struck a chord with our team as we waxed existential and considered the future of humanity. We were very invested in creating an educational experience focused on sustainability. Eventually, two ideas floated to the top of the list: a beach cleanup game, and a game about reducing your carbon footprint at home. We mapped out the user journey for both games and ultimately decided to go for the second idea. 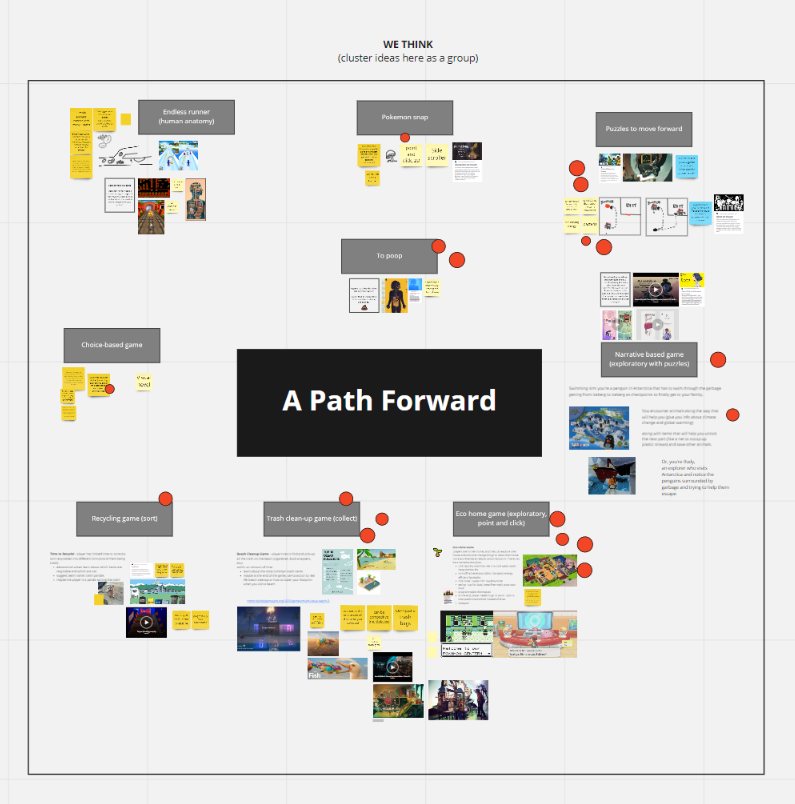 Ideation on the Miro board
The idea originally stemmed from a collective feeling of helplessness in the face of unending negative headlines about climate change. Although we recognize the need for huge advancements on a systemic scale in order to address the climate crisis, we wanted to answer the question “What can I do, as one person, to help change the world?” The goal was to provide a list of tangible actions that an individual can do in order to move the needle, however incrementally, in the direction of preserving our planet.
We decided to keep the actions localized and within reach in our homes– hence the name “Abode” was born. Although the concept itself was simple, a lot of research and fact-checking had to be done in order to determine which actions to include and to quantify each action’s impact. Just like in our medical animations, we wanted everything to be as scientifically accurate as possible. Medical Designer Chelsea found the data we needed by consulting different environmental organizations online, and compiled her research into a reference list that can be accessed in-game. 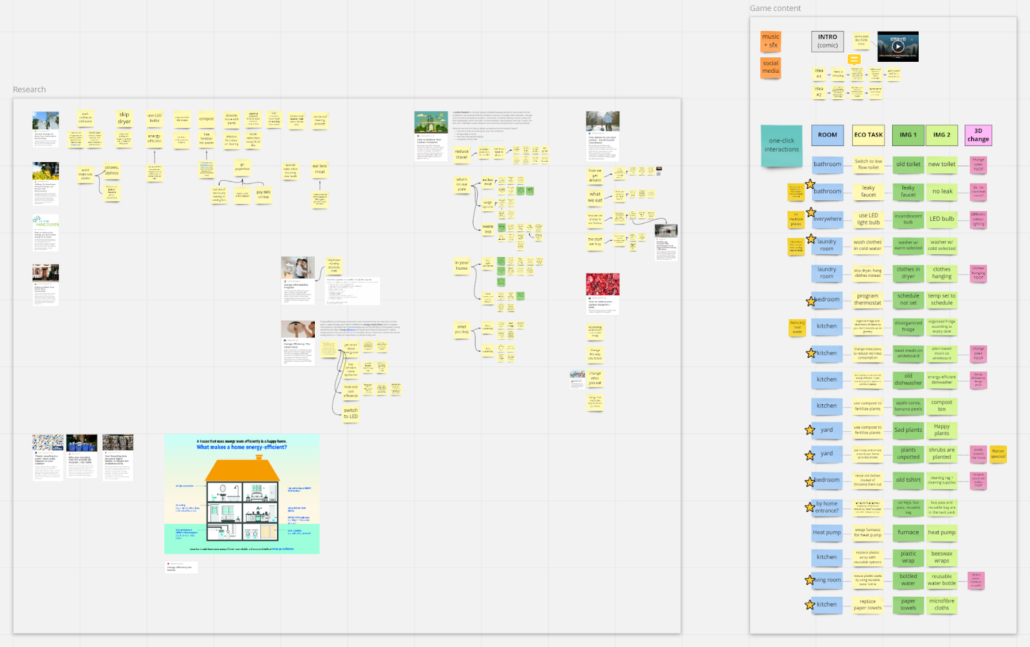 In order to chart out how the player would experience Abode, we first mapped out the interactions in Rudy’s home into a wireframe on Miro. It contained all the rooms, tasks, and assets we would need to create in order to bring the game to completion. We also put on our architect hats and created a rough floor plan which served as the level design for the game. We now had the entire blueprint of Abode laid out and ready for production, with the clock ticking! However, we quickly realized that there was a major roadblock in our plans… 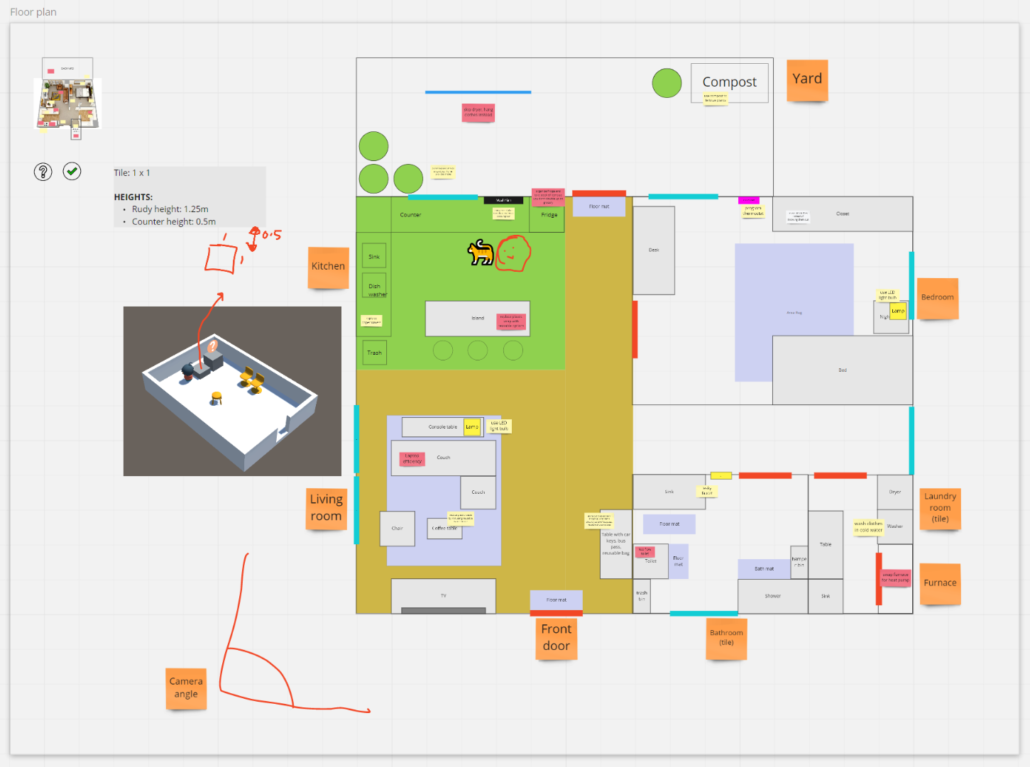 It was a busy time at our studio, and none of our 3D Artists had any bandwidth to work on this project. Undeterred, our team divided up the 3D modeling work amongst the Developers Matt and David and Head of Art & Design Joyce, who had to learn Blender from scratch. A game jam on a time crunch was the perfect opportunity to suit up and dive into the deep end. This meant a lot of YouTube tutorials, late nights, and frantic trial-and-error testing. Blender wasn’t the only new skill they had to master, however. The 3D models that they were creating consisted of furniture and decorations necessary to populate Rudy’s home, and so the crew needed to learn interior design in a hurry as well.
Matt and David were in charge of the rooms of the house, and Joyce was in charge of filling it with plants. It quickly became apparent that Matt and David had different art styles that didn’t work together cohesively. Thinking quickly, David made the call to stick to a mid-century modern look for the style, and drew inspiration from furniture stores such as CB2 and Restoration Hardware. Having these references made it easy to match the same style between the two of them.
Despite the flurry of activity, the devs ended up with a successful workflow, making sure that the meshes were to scale, all transforms were reset upon export, normals were uniform, and the pivot point of the geometry was centered. They made use of many existing modifiers, such as the mirror modifier, subdivision surface, and cloth modifier in order to make the furniture pieces. Something new was learnt every day, and by the end, the 3D models were looking much better than the ones created at the start. 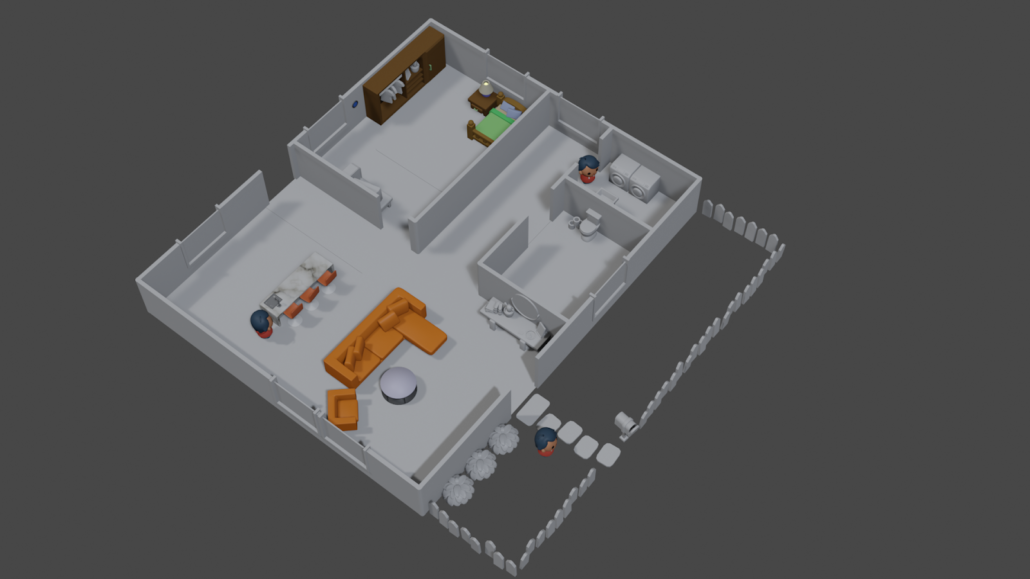 3D modeling wasn’t all they had to do. After the herculean effort of learning a new program, figuring out how to design furniture, doing the job of the 3D Artists, and building all the assets, the devs now needed to create the rest of the game. The geometry was imported into a master Blender file in which Joyce would set the colours, and then exported into Unity individually as FBX files. Luckily, this was right in their wheelhouse, and their experience in Unity made the rest of game assembly a breeze compared to asset modeling. 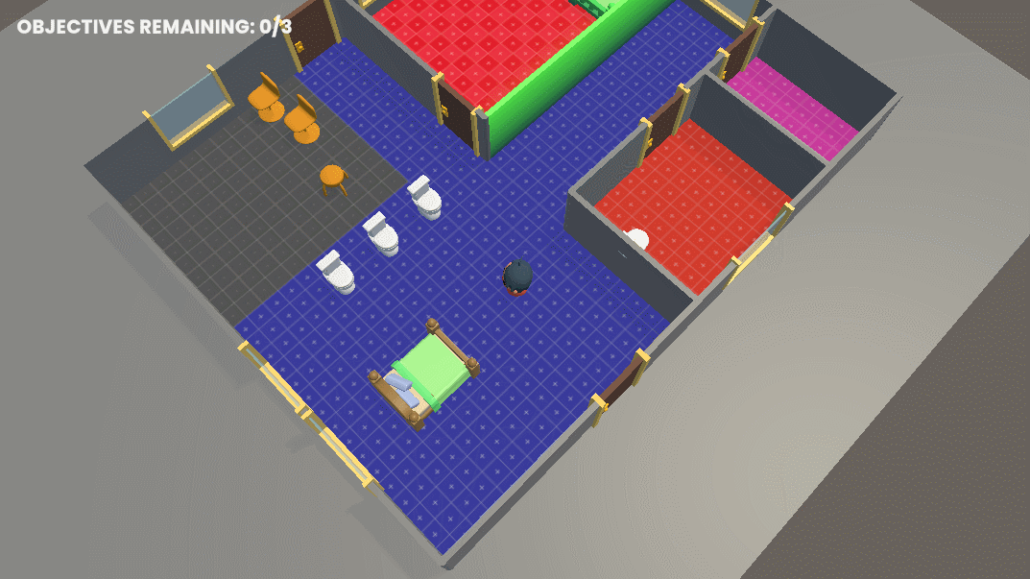 While the devs worked on making the game playable, Art Director Joyce was busy developing the look and feel of the game’s aesthetics. Since it was set in a residential home, the team wanted the environment to evoke warm and cozy feelings. Joyce decided on a colour palette that was muted and friendly, with an art style that was approachable and encouraged exploration. As the resident plant mom of the team, Joyce was also responsible for modeling all the foliage in and around the house, turning the scene into a lush, lived-in space. With Matt and David’s furniture and Joyce’s plants and palette, the team was able to create a chic space that looked like a million bucks (literally, by Toronto real estate standards). 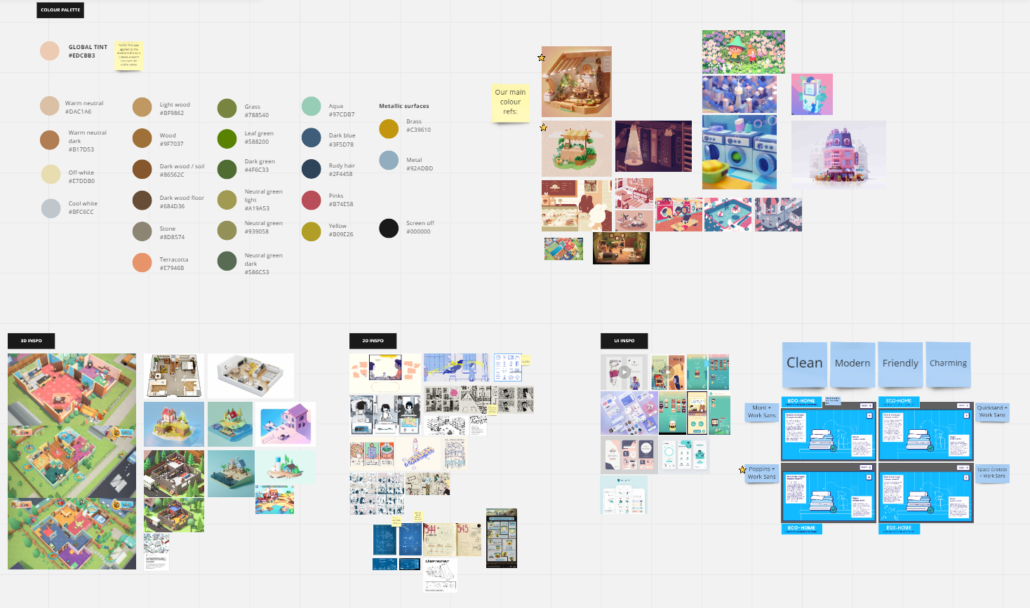 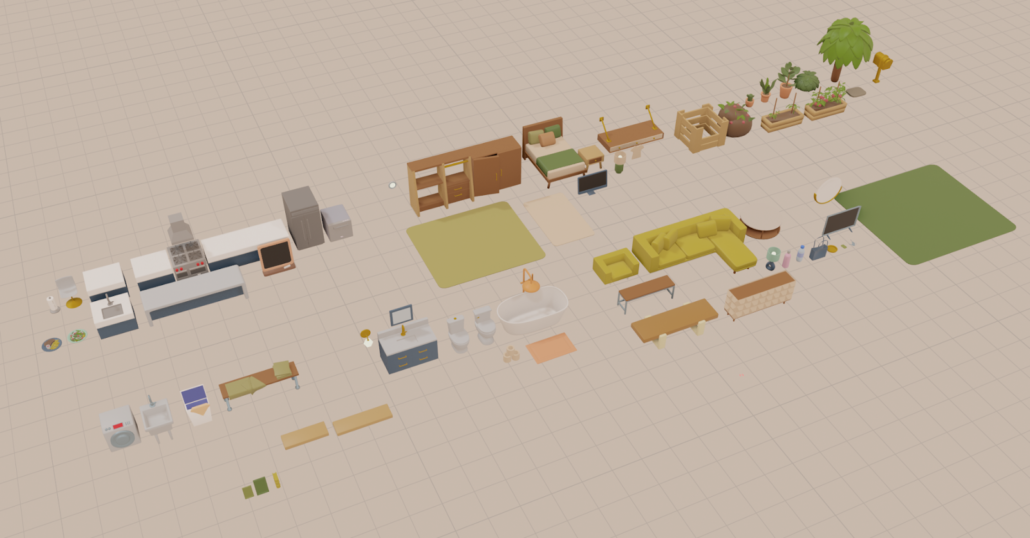 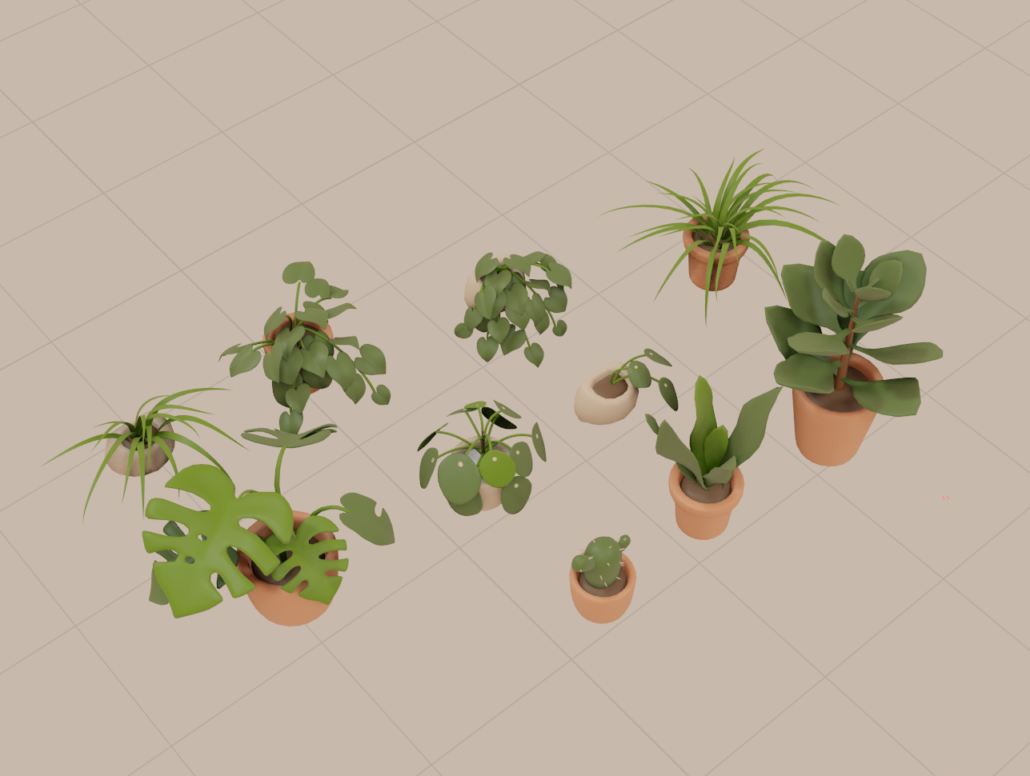 3D environment aside, there were also 2D assets that needed to be created for the game. For the eco-information panels, it was decided early on to go with a simple blueprint look to keep the scope in check. In order to create them, Chelsea studied blueprint illustrations and Ikea assembly guides, and carefully set up the UI so that the content was educational without being overwhelming. The intro and outro comics were completed towards the end of the game jam by Joyce, who matched the style to Chelsea’s illustrations. 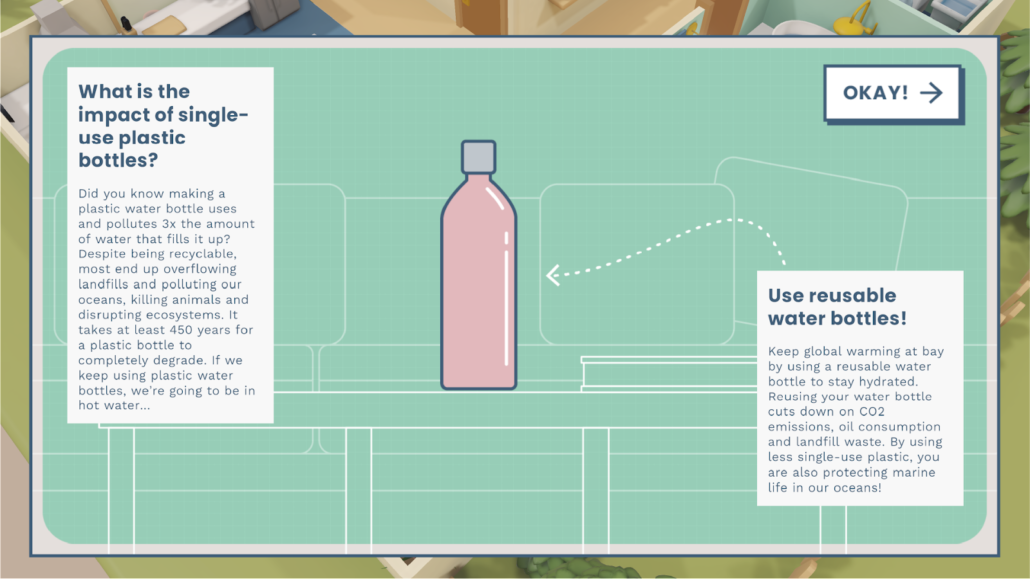 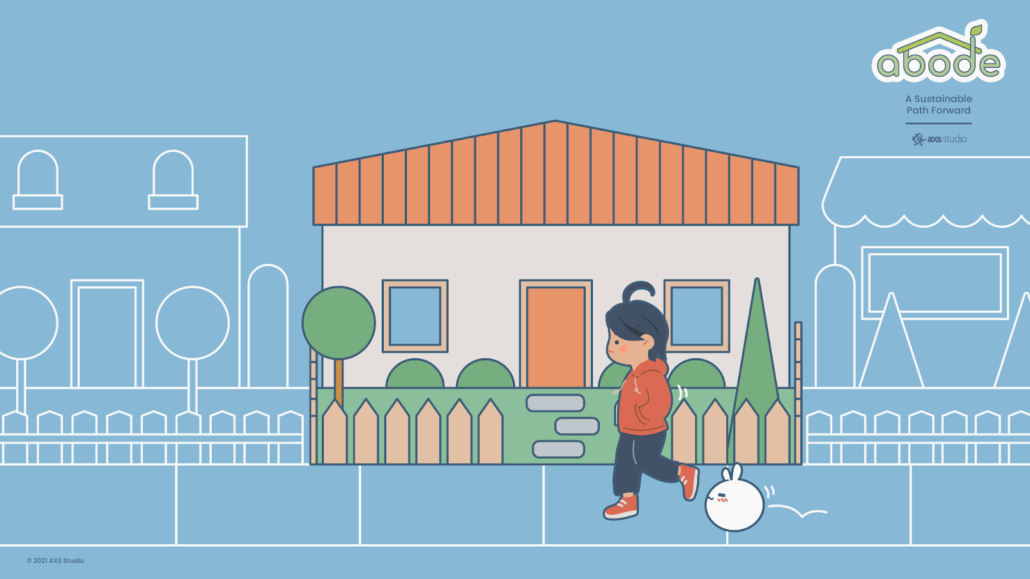 Bringing it all together

By learning Blender and interior design; creating a home’s worth of 2D and 3D assets from scratch; compiling pages upon pages of sustainability research; and balancing a 2-week game jam with studio production responsibilities, Team KICK AXS pulled together to exceed expectations once again– surpassing our fundraising goal of $1000 towards biomedical communications research. In just a fortnight, the team was able to create an interactive eco-friendly experience on the theme “A Path Forward”.

Just like for Pandemiquest, we had ambitions to port the game to mobile devices and release it on the app store. Originally, the plan was to keep the movement controls of the game intact– on desktop, the player would use W, A, S, D keys on the keyboard paired with mouse clicks to navigate the game. On mobile, this would have translated into a digital joystick. However, after some user testing we agreed that it didn’t feel natural. So, the entire movement system had to be rehauled to be tap-movement using NavMesh, making it much more mobile-friendly, and a lot more work.

Updating the UI to fit mobile screens was also a challenge. Through observations gleaned from user testing, the UI design underwent many rounds of iteration, ultimately landing on an interface that displays bite-sized educational content, and visuals that were easier to engage with.

On top of that, we added new points of interest, and spent some time on art assets we didn’t get to during the game jam. All of this was tested and tested again on devices of all sizes and operating systems. Our aim was to release the apps in time for Earth Day, so we had to keep to a tight schedule.
In all, Team KICK AXS worked together like a well-oiled machine, and stepped out of our comfort zone to create something incredible in a very short amount of time. If you haven’t had a chance to play Abode yet, it is now available for download from Apple App and Google Play stores. Join us on an educational eco-friendly adventure through your home to make the world just a little more sustainable! Let us know what you think in the comments below.
Check out Abode 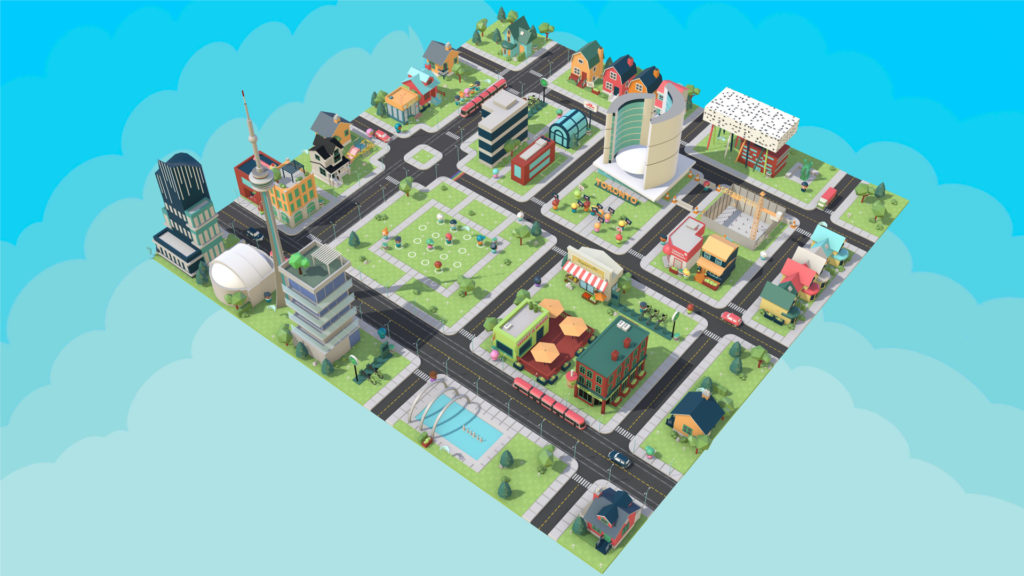 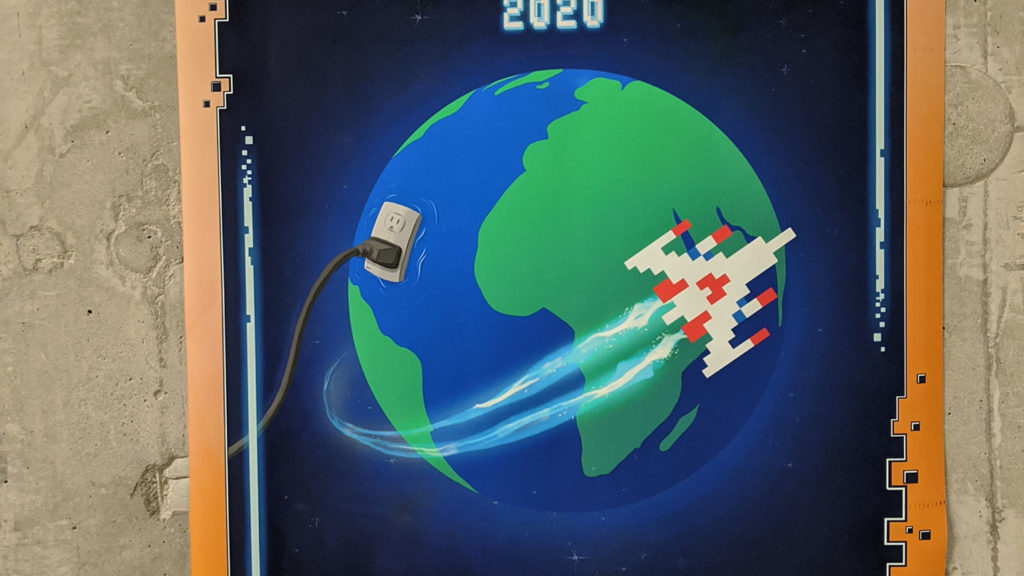 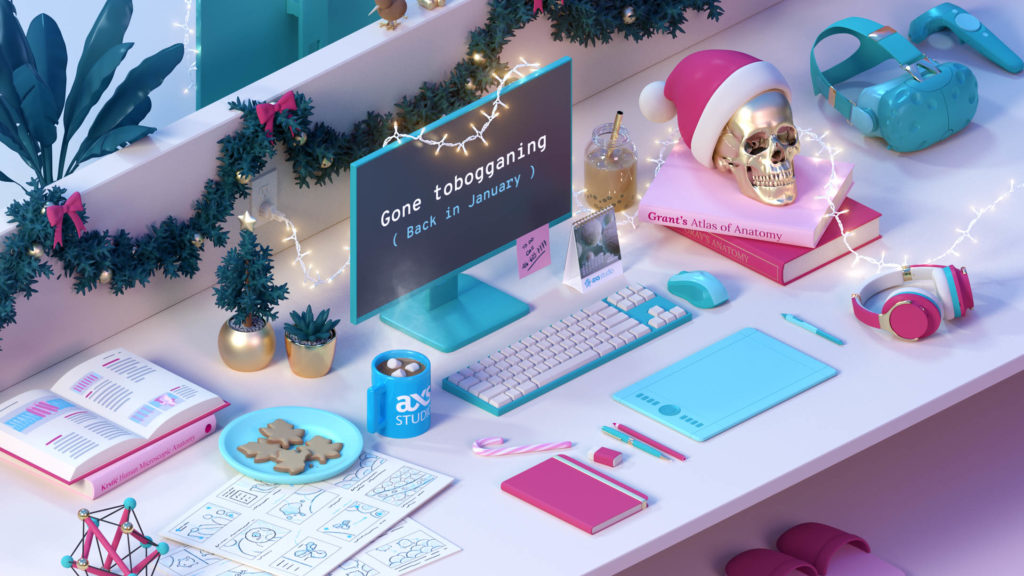